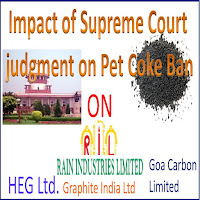 Friends, In my previous post, I have been highlighting the fact that there is a Supreme Court judgment awaited in June, but because of delay from govt ministries, it was delayed and has been delivered on July 26th 2018. So let’s examine the impact of this on Rain Industries.
Even before I explain in detail you can take a look at the Rain stock price chart of Rain from 26th afternoon to till Tuesday 31st July.

There is an old saying in the market that “Sab kuch price me dikhta hai” it means that every news good or bad is reflected in the stock price. The Supreme court judgment came in around afternoon on 26th July.

Rain stock price was doing good till that time and was quoting positively around 202 Rs, but suddenly after the news came of Supreme court order, it started falling and finally closed around 194 levels. After that on it has been struggling to come near 200, and on 31st July, Tuesday it came down to 188 levels before bouncing.  So the price movement of Rain tells the entire story, that there was certainly some unexpected negative news in it which smart people were using for offloading their holdings. No tv channel or newspaper analyses calcining industry closely and hence there were no write-ups or any breaking news from them on its impact on Rain Industries and Goa Carbon. So what were the negatives in it for Rain, let's examine the Supreme Court judgment.

1. The Hon'ble Supreme Court of India has noted the minutes of the meeting held by the Ministry of Environment, Forest and Climate Change (MoEFCC) along with Officers of the Ministry of Petroleum and Natural Gas (MoPNG) and Environment Pollution (Prevention & Control) Authority for the National Capital Region (EPCA). The discussions were also held with the Directorate General of Foreign Trade (DGFT). The relevant extract of the minutes in para 1.10 is given below

1.10 EPCA stated that based on extensive discussion between MoEFCC, MoPNG and DGFT, a regime for regulating the import of pet coke had been suggested by DGFT, which is also compliant with WTO norms. EPCA stressed that this regulatory framework should be immediately implemented and import of pet coke should be permitted only in those industries where pet coke is used as a feedstock or in the manufacturing process and not as a fuel. These industries, which have been permitted to use pet coke in NCR states and accepted by the Hon'ble Supreme Court are the following: Cement, Lime Kiln, Calcium Carbide and Gasification. Import should be allowed only for these industries in the country, which will make the regime compatible with WTO requirements. EPCA also said that it will prefer an arrangement, which prioritizes the use of domestic pet coke as against imported pet coke.

2. From a reading of the above decision, it is quite clear that a consensus decision has been taken that the use of imported pet coke all over the country may be permitted only in the following industries: Cement, Lime Kiln, Calcium Carbide and Gasification. It is stated that this would be in compliance with the WTO norms and these industries may be permitted to import pet coke for use as a feedstock or in the manufacturing process and not as a fuel.

3. EPCA has also stated that it will prefer an arrangement, which prioritizes the use of domestic pet coke as against imported pet coke.

4. Since the decision to permit limited import of pet coke has been taken by consensus by all the authorities mentioned above and since the time already fixed by us expired on 30.06.2018, we direct that the decision was taken in para 1.10 in terms of the Minutes dated 18.07.2018 be notified and implemented with immediate effect.

So this is a big blow for Rain industries. What it means is that they cannot import any new GPC into the country now. GPC is the main raw material for Rain industries CPC production in India. And most of it is imported from China and the USA. They also import CPC from their own plants in the USA and blend it here in India with different grades of CPC produced here. So that also will be not allowed to be imported. Rain’s  “India Blending  Strategy” which has been implemented after so many years of effort will go for a toss.

So, why this industry has not been exempted from import ban? I have no concrete information on that. But my best guess is that it is an overlook by govt departments while drafting the guidelines and presenting to Supreme Court.

How bad it is really?

Remember Rain and Goa Carbon maintains 2 months GPC as inventory so they can manage for some time without disrupting the production. But what if it takes longer than a month or so for getting exempted from Supreme court?

We for sure are of the opinion that Supreme court will give them exemption from the ban, but if it comes after a delay say after  3-4 weeks, Rain will be in trouble with production. With production uncertainty, they will lose out many contracts for Q4 to sell CPC.

Very little impact on them actually. The usual question comes to the mind that if Rain and Goa carbon cannot import GPC how they will produce CPC and supply to Hindalco, NALCO, Vedanta etc in India? Well here is the second blow, the Aluminium industry is exempted from the ban and they can easily import CPC from China. And recent trends suggest that they are already buying more from China because it is cheaper than Indian CPC. So they will increase the imports from China and won’t have to suffer much.

What next for Rain?
Now they have woken up and have informed that they will be making presentations to the Govt and lobbying with them to inform Supreme court and get them exempted from the ban. I am sure they will be exempted but not sure how much time it will take. It can be exempted within a week or so. Till that time Rain’s stock might oscillate in a range with a negative bias. But if exemption happens quickly, that will restore confidence to some extent.

What about Graphite India and HEG?
Yes, they will also be impacted in the same way since their main raw material is needle coke which is again a high-end petroleum coke. They also will have to be clarified from the Supreme Court and should also get exempted in due course. If you have noticed, Graphite India and HEG shares were also under pressure on July 27th, July 28th and July 30th  after the Supreme Court announcement. But since then it has moved on from Tuesday because of super result expectations from HEG on August  1st.

Since Graphite electrode prices will remain firm for at least next 2-3 quarters there won’t be much price pressure on HEG and Graphite India. The market will ignore this Supreme Court ruling since everyone knows that it can be exempted.

So I don’t see any further negative for them as of now unless there is a delay in getting exempted.

See this analysis in Hindi on https://youtu.be/HP_3bJqPchE