So now what we can expect from SC hearing on 9th Oct?
Let’s examine many scenarios:

SC allows Aluminium and Calcining industry to import pet coke without any restrictions.

SC accepts new BIS norms for permissible limits of Sulphur among other new rules to limit the pollution level arising out of use of Pet Coke. These rules might be stricter from earlier norms. All companies might have to take new pollution clearance certification after inspection by the local pollution dept under new norms. Only after that, they might be allowed to import pet coke. It might take 4-6 weeks before they can actually be able to start importing the pet coke.

Probability:  High
Positive:       Only for those companies who got modern pollution control equipment installed at
plants. Good for Rain Industries and most likely for all Aluminium companies.
Negative:     For Goa Carbon. It has got 3 plants in 3 different states and doubtful to have proper
pollution control equipment installed at 2 of those plants.

Based on Government’s inputs SC puts very strict pollution control norms for Calcining industries. Making them compulsory to have Sulphur Scrubber and other equipment in place before allowing them to import pet coke.

Probability:  High
Positive:       Aluminium Companies.
Good for Rain Industries slightly.
Negative:     For Goa Carbon.
Price impact:  Many small calciniers in the country would have to shut down their operations which were dependent on imported pet coke because they cannot invest huge money for such equipment. This will push the domestic prices of CPC to some extent and help larger players.

SC may allow Aluminium companies to import pet coke based on their readiness of new BIS norms. But it may ask the government departments (EPCA, DGFT etc.)  to formulate the guidelines/pollution norms separately for calciniers. And as usual, it might give them 6-8 weeks’ time for the next hearing.

Probability:  High
Positive:       Only Aluminium Companies.
Negative:     All Calciniers. Rain Ind, Goa Carbon. Rain and Goa Carbon both will struggle to keep their plants running. And might have to shut down the plant for maybe 2-3 months.

5)    Defers decision for next hearing

SC may defer it to next hearing for want of more clarity and info from govt and companies involved.
Probability:  High
Positive:       None.
Negative:     All Calciniers. Rain Ind, Goa Carbon.

It is least likely but well within Supreme Court's consideration. SC may continue the pet coke import ban for all including to Aluminium and Steel industries.
Probability:  Very low
Positive:       None.
Negative:     Big negative for Goa Carbon, might have to shut down.

So in most likely case, Supreme Court may take few more weeks/months to hear the case before coming to a decision. But in all probability things will be better for all better companies mostly who have invested in pollution control measures and are not taking it lightly. Just see how poorly Graphite India management has been managing its Bangalore plant with numerous protests against them by residents. Now SC is in no mood to entertain the polluting industries. 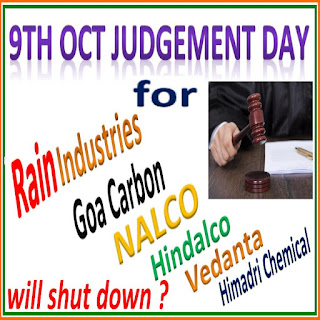