Since peaking out in the early part of the year, Rain Industries has been going down without anyone expecting it. Despite big investor Mohnish Pabrai and Dolly Khanna holding a significant chunk of shares. There has been a series of bad news coming for the company from multiple fronts. Starting with Supreme Court ban on pet coke import and then CPC prices cooling off after rising for a year.

In the recent Q3 results company has faced another issue in its Europe operations. Where it has major plants for Coal Tar Pitch and Chemicals. The water level in Rhine river has fallen to historically low levels after a drought has created havoc in material supply across Germany and many other European countries. All major industries in Germany are dependent on transporting their raw materials and finished goods through the Rhine river. Rain Industries subsidiery "Rain Carbon" in Europe also uses the river to send its CTP (Coal Tar Pitch) and chemicals to big customers through this. Because of low water levels, they have to suspend many shipments and use the trucks for sending the materials to customers. It has caused the extra cost on company and sales were also down because few clients could not get the products. One of the major client BASF has curtailed many production lines because of this issue. The problem is so acute that trucks were not available for transport and were fully booked. The company can't do in this matter and has to suffer.

Now the recent news reports from Germany suggest that suddenly after few days of good rain, water levels in the Rhine river has risen and barge operators have started their operations. Also, the transportation cost has come down dramatically. Freight rates for barges going from the Amsterdam-Rotterdam-Antwerp hub to Germany and Switzerland were falling heavily as Rhine water levels rise sharply and forecast to rise further this week, one of the news reports said Tuesday.

German chemicals major BASF says this improvement has allowed a certain stabilisation of raw materials supply to its Ludwigshafen complex.

Rhine water levels rose on Tuesday to 122cm, more than double the average levels over the previous four months at just below 60cm.

With Rhine levels now expected to rise to 150cm by midweek, BASF said that it “anticipates that ships already loaded and chartered in advance will now be able to head back" to its Ludwigshafen site, stabilising the supply of raw materials.

This comes as a welcome news for Rain Industries and hopefully, they would be able to ship their products much easier and at normal cost. 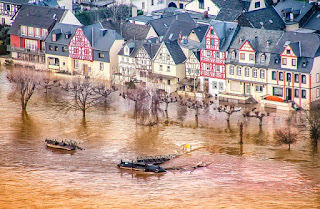