Another big problem for Rain Industries

There is a saying that when bad times come, it comes from all directions. It is exactly happening to Rain Industries and its shareholders. Just when everybody thought that now its problems will start getting resolved one by one when after Supreme Court of India lifted the ban of pet coke import. But after that, another problem came from Rain Industries not able to import the CPC from its USA plants. Now that is pending in Supreme Court and first hearing might happen sometime in January 2019. We have yet to get a date assigned to that case. 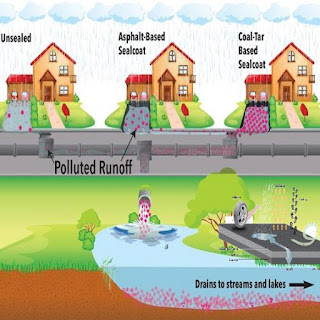 Also because of global growth concerns has brought down the Aluminium prices down to below 1900$ levels. That is the 2 years low. It is hurting Aluminium smelters and might impact their expansion plans. In India, govt has yet to take a firm decision on imposing anti-dumping duty on Aluminium imports from China. After the USA put such duty on Aluminium, Chinese companies have been dumping the cheap Aluminium in India and hurting Indian producers like Hindalco, NALCO and Vedanta.
All these problems have caused great bearish pressure on Rain Industries to share. Just for a brief period it bounced from around 120 levels to 145 but could not sustain it there and it has again come down and is now at  121 Rs on 7th Jan.
Now this round of selloff is coming because of big news from the USA. Several cities have sued Rain Carbon along with other companies who manufacture coal-tar-based sealant for millions of dollars. And if they do win the case, then there will be a flood of such lawsuits being filed all over in the USA from hundreds of other cities claiming similar damages which might then run into billions of dollars for these companies.

Let's look into the details of what is the case and how it impacts Rain Carbon.

What is sealant or sealcoat?
Coal tar sealant is a thin black coating applied to paved surfaces (typically driveways, parking lots, etc). It is not commonly used to pave roads. Sealcoating the driveway/parking area, makes old asphalt look new and protects its surface, but there are serious environmental concerns with its use. Sealcoat comes in two basic varieties: coal tar-based and asphalt-based. The coal tar variety is more resilient, but it contains much higher levels of a class of chemicals called PAHs (polycyclic aromatic hydrocarbons) that harm fish, and with prolonged exposure, pose a risk of cancer in humans. Manufacturers choose coal tar for sealcoat because of its resistance to petroleum products like gasoline and oil, which drip from cars and deteriorate asphalt surfaces.
Rain Carbon, Koppers Holdings and few other manufacturers produce and sell coal tar-based sealants in the USA. Though this product is banned in many states, still it is approved by USA govt as a safe product to manufacture and sell. 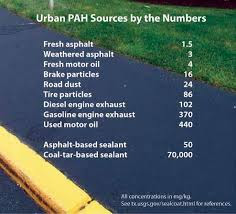 How does coal tar sealant migrate from driveways and parking lots and into stormwater ponds?
In time, sunlight and vehicle traffic wears down sealcoat and sealcoat flakes are washed away by rain or carried away by wind, contaminating stormwater ponds, streams and lakes with PAHs. PAHs cause tumours in some fish disrupt the reproduction of aquatic organisms and cause some water-bottom species to avoid sediment altogether. Health risks to humans related to PAHs are based on the length of exposure to vapours or sediments contaminated with PAHs. PAH Concentrations Coal tar contains as much as 30 percent PAHs by weight.

Are there health implications?
As long as it remains in sediment in stormwater ponds, PAH is not a public health concern. However, once the contamination is dredged it could pose a health risk if the dredged soil is not properly disposed of in an authorized landfill designed to ensure that the waste cannot migrate into the environment – this is why the City is moving forward with a plan to clean up the contamination.

How will the City remove PAH from ponds?
To remove the contaminants, crews will dredge the pond and, when required, haul contaminated substances to a landfill for proper disposal. The excavation process is routine, but the size and placement of each pond will affect the removal timeline.

Does the City know how much it will cost to dispose of PAH?
Based on the project information available, cleanup could cost approximately three to four times as much as common excavation costs. An estimate suggests upwards of 75K dollars for each pond. And usually, in one city, there are anywhere 300-400 stormwater ponds.

Why litigation?
It is very costly to remove PAH contamination from stormwater ponds. The City wants to hold the correct party responsible for the financial burden to correct this issue. This cost should not be funded by taxpayers.

Does this case really sound?
There are more potent sources of PAHs in the environment that include not only car and power plant emissions but also wood smoke and grilled hamburgers. PAHs occur naturally; they are all around us and always have been. PAHs are made whenever something organic is heated up or burned. Smoke from forest fires and wood burning fireplaces contains PAHs. Plants decaying in a swamp or a compost pile are making PAHs. Emissions from planes, trains and automobiles, cooking food, lubricating oils, volcanic eruptions – PAHs are in all those substances as well as in materials derived from coal tar. This means that PAHs are everywhere in our environment. PAHs have been around since the dawn of man. If there was a fire that offered our ancestors warmth or light or cooked their food, PAHs were present.
Given the commonality of these compounds, hence ban on coal tar sealants won't help cities. Asphalt alternatives don't last as long, so customers might give up on resealing pavement.
The product has been safely used for decades by applicators who follow industry guidelines.

IS COAL TAR REGULATED AS A HAZARDOUS SOLID WASTE IN THE US?
Refined coal tar that is the base material used to make pavement sealer has been tested and does not meet the Resource Conservation and Recovery Act (RCRA) hazardous waste criteria. Different brands of pavement sealcoat emulsion tested at different times in different labs have all passed EPA’s toxicity characteristic test, indicating that RTS does not meet the criteria to be a hazardous waste and disposal in non-hazardous waste landfills is appropriate.

More information can be found at http://www.pavementcouncil.org/faqs/

What is the response from companies till now?
Rain Carbon has not released any statement yet.
But Koppers Holdings has released a statement: “Koppers does not believe there is merit to these claims and intends to vigorously defend these matters.”

What impact this news got on share prices of all the companies sued?
Rain Industries which is the listed Indian company of Rain Carbon has been being hammered black and blue in India because of this sudden turn of events. While Koppers Holdings share has been up despite this news. In fact, it rose around 10% on Jan 4th along with strong rebound in US markets.
Stella-Jones Corp which is listed in Canada is also largely positive since this news broke out in the first week of Jan. Other companies named in this lawsuit “Coppers Creek Chemical Corporation” and “Lone Star Specialty Products LLC” are not listed in stock markets.

It appears that Indian shareholders are getting scared just by seeing the lawsuit and selling off in panic. But in USA and Canada shareholders are not worried over this lawsuit.
Does Rain Industries have any protection?

When they acquired Ruetgers from previous owners Triton partners, they have indemnity cover for any future environment-related expenses. They have already claimed a good amount in 2014. I am not sure if that cover is still valid after 6 years. Company reply might clarify more on it.